You will see the graceful aerobatic maneuvers of the four-jet Diamond Formation, in concert with the fast-paced, high-performance maneuvers of its two Solo pilots. Finally, the team illustrates the pinnacle of precision flying, performing maneuvers locked as a unit in the renowned, six-jet Delta Formation.  – Blue Angels

As my daughter and I approached the Marina to see the air show this afternoon, a Blue Angels jet blasted up Fillmore Street just yards above our heads. The sonic boom and the raw power of the aircraft were thrilling! The Blue Angels performed to an enthusiastic crowd of about one million people both on the waterfront and afloat in the harbor. 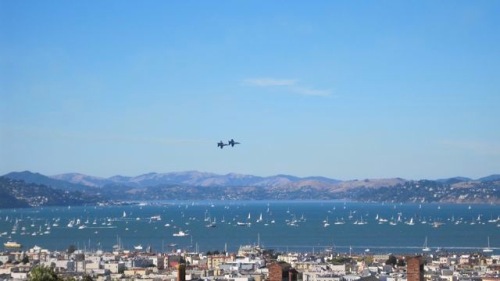